Goal for this past week:

I wanted to get 2-3 shots roughed in for this week.

What I got done:

I got EAC 070 and ET 020 splined and ready for crit.  I was hoping to do a bit more than I initially planned to because I thought I was going to have some extra time this weekend but I ended up having to take my girlfriend to urgent care.  I still have work to show for this week though!

On top of my weekend trip to the doctor I also struggled with some laptop issues this week where my computer crashed a couple times and files were getting corrupt.  I think I have that under control though and it was after all that when I finally made progress this week.  Also, my sprint 2 to-do list is fairly small because the majority of the rest of my shots are in the camp/ tent scene (sprint 3).  Since I have a fairly small sprint 2 I plan on being able to get all my shots to a rough polish with about another 1.5 weeks of work.  I need to shift gears for the upcoming week though since we are going to be blocking in the rest of our film before doing anymore rough animation but I’m really comfortable with where we are sitting with everything.

What I plan to get done throughout the next week:

I will be getting half of my remaining shots blocked in for next week (I believe that’s about 6-7 shots.)  Ideally I’d like to get everything blocked from our camp and tent scene but I know I’ll at least be able to get half of it done.  I also am going to be throwing final details on the Elder Thing model I made a few months ago so that can be passed on to the rest of the team.  Oh! And I have some referencing problems that I need to fix for Josh.  Busy week ahead! (but arn’t they all?)

Goal for this past week:

Get all my shots for our interior tower scene to a first level of polish and pass those shots off to the rest of the team to start render testing and an initial render pass.

What I got done:

I am happy with most of what I got done, and I was slightly disorganized during this first sprint so things weren’t going as smoothly as I had hoped.  I still got my shots ‘done for now’ and luckily we have almost 2 weeks of wiggle room to go back and do another layer of polish.  I initially thought we were going to use one of our wiggle weeks now but after meeting with the team we decided to move onto the next chunk of our animation and then save final polish for the end of the term.

What I plan to get done throughout the next week:

If anything needs to be immediately tweaked from the previous sprint I’ll make sure those get done first.  Other than that I plan on getting two-three shots from the next sprint roughed in and ready for crit from Dave Mauriello and the rest of the team/ Nick.

This week is going to be a similar post to last week.  I animated for the entire week, again.  I worked on getting another 5 of my 8 shots polished.  I finished one shot which was about 7 seconds of animation.  I also got 4 other shots almost finished and those equal about 15-20 seconds of animation.  All in all it was a super productive week but I couldn’t quite get everything done by tonight like I had hoped.  I learned we have a week of leeway for this sprint though so I’ll be putting all the final bells and whistles on everything this week and then moving on to another scene the week after!  I also hope to be able to add one more round of polish to what I’m calling my big big shot for this sprint, this week.  As of right now I have about 20 seconds of animation that I can call done and by the end of tomorrow I’ll have about 30 seconds I can call done and then by the end of the week I’ll have my entire 40-ish seconds for this sprint finished.

So I did a lot of animating this week, but there isn’t much to actually talk about so I apologize for my short post!  I’ve got about 30 seconds of animation to do for this sprint and I got about 10 seconds of that done this weekend.  I’m not going to call it “done done” but its at the level where’d I’d be happy with calling it done if I don’t have time to give it one more level of polish.  I did spent all my time polishing it from the body to the face and while I’d like to spend as much time as I spent this weekend, again, tweaking it in the graph editor I need to call it done for now and continue with my next shots.  My plan is to get all my stuff to the quality of the shot I did this week and then use whatever time is left to really polish the most important shots (ex: Danforth going crazy.)

Pros: I made good progress and I’m really proud of my work.

Cons: It still doesn’t look like I’ve even made a dent in my pile of animation.

This week was crazy productive!

Summary:  This was probably the first week I really sat down and created a lot of animation.  I finished blocking a few shots for the tower and jumped right into smoothing it out.  I was able to rough in about 5 shots which was about 23ish seconds of animation.  I also shot some reference for a couple shots with Pat and Dave and then cut my references so they could be added to the animatic.

Pros: I didn’t expect to be able to start splining this week so that was great!

Cons: Facial rigs were still being polished so I couldn’t start facial animation, but they will be done within the next day or two! 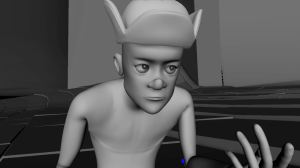 Summary:  On top of animation we have figured out a solution to the problems with the first part of our story.  Dave and I figured out storyboards before calling the group together for the final decision.  I’ve also been in contact with Anthony all week so we can make sure the facial rigs get done soon.

Pros: The restructuring we did of our story really works well and will cut out some animation work which will definitely help us!  Rigs are almost finished.

This week wasn’t a production heavy week but it was productive in the planning and organizing department.  We started the week off with a team meeting to see where everyone was sitting after the long winter break. There we decided upon a new production cycle where we will break up our production into smaller chunks but this will allow us to start rendering sooner.  I then spent a few hours organizing all my files from last term, setting up a more workable file structure, and compiling playblasts for Ethan to implement into the animatic. I also took one of my shots to the point where I am ready to begin splining. (minus facial animation).  My ppj will be of more detail next week because the next couple will be full of productivity!  Go team!

Summary:  This week was not the most productive weeks due to the holiday.  I lost 5 of the days this week due to my father visiting Philly for the Thanksgiving holiday.

I continued to work on blocking out my shots and I’ve got all but 4-5 of them initially roughed in.  This was the first week with our character body rigs done (we have hands and eyes now and Anthony did a great job working out all the kinks) so that made the couple shots I blocked in this week just look so much better.  I worked on part of the final sequence where Danforth goes crazy at the end.  I also began to go back through my previous shots and update the rig references with the newest version.  I wish I had more to say but all I did was work on animation 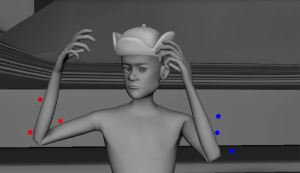 Pros: I’ve got most of my initial blocking done so I’m going to have time to go back through and refine my blocking before the end of term.

Cons: Lost a lot of days but luckily I planned ahead so I’m not behind.

Upcoming:  Finish the shots left that need initial blocking, go back through updating rigs and refining blocking.  I also haven’t gotten to finishing weight painting so I’m going to try and get to that this week but worst case it will be done by the end of term.

My Tweets
AT THE MOUNTAINS OF MADNESS
Blog at WordPress.com.