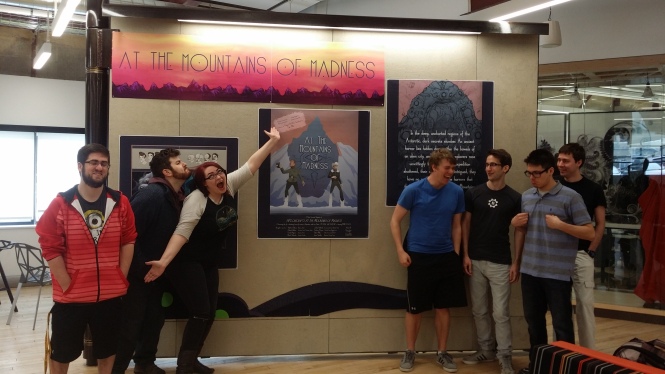 Aaaaaand we’re back! after a restful (but productive) spring break, team Spooky is back in action. Over the break we worked on sprint planning, animation, asset modeling, compositing, and catching up on some much-needed rest. We’ve detailed out our schedule for the next ten weeks and are confident that we’ll be able to finish everything by our two major milestones, the final project check-in (4/28) and the Senior Show delivery (5/26).

We’ve also decided to meet weekly with Dave Mauriello on Mondays at 3:30pm for animation critique, starting last week! Dave’s feedback has been immensely helpful for Gabe, Dave and Pat. Now that the show is all blocked in, they’ll be working on polish and performance from now until the final render deadline.

Josh has been working with Jay and Nick to get the render farm working (again). The machines were updated over Spring Break to boot in linux, but IT accidentally installed an incompatible version of Qube. Jay is working to re-image the machines now, but the computers in room 252 should be mounted on the farm now. Once we confirm that the render farm is working, we will re-render the trailer and all of our exterior mountain pass shots.

Asset production is underway for our remaining environments, with Ethan finishing up the Exterior Lake’s Camp scene, Anthony modeling tents, Josh working on the alien building models, Pat sculpting assets for the Ancient City, and Val providing textures when necessary. We plan to have a more detailed schedule for the environments by this week’s meeting!