Goals for this week:

What got done: Everything!

Dyer and Danforth are both textured with finished and attached hair. We had to have an “Emergency Mustache Meeting” this weekend to figure out a bind solution for Dyer’s mustache that would work with his facial rig. Our original wrap deformer method had failed and skinning had proven difficult, but we eventually got everything working the way it needed to. Styling Dyer’s hair also proved to be an unexpected issue — tufts of his hair would arbitrarily disappear when I adjusted some values in the nHairShape node, so I had to work within these boundaries to style the hair to its final shape.

The mustache is now fully attached to his face (after extensive research into facial hair, including much tugging on Ethan’s beard), and it now deforms with his mouth movements and expressions. This accomplishment was largely thanks to Anthony and Josh at the Emergency Mustache Meeting. The eyebrows have also been redone, so our characters are no longer both Groucho Marx. Dyer’s long wispy brows mimic his flourished hair and mustache and help accentuate his angular facial expressions. Danforth’s brows are rounded and innocent, but still cut a good profile when he’s angry and yelling. Much better!

The textures are still up for critique from the team, but I think they’re in a good place. I wanted Dyer’s clothing to be brighter and warmer than Danforth’s, both to match his complexion (warm vs cool) and to highlight his vibrant, passionate personality. That’s why his textures are more saturated. Danforth, who is the more rational and cool-headed person (excluding his breakdown at the end), has a dark, cool, high-contrast pallate.

I also loosely based Dyer’s clothing on this colorized reference of Antarctic explorers that Dave found. I originally made his jacket more olive-toned, but that clashed with his skin tone so I warmed it up to a more orange-toned khaki. That being said, I’m still not sure that I’m buying Dyer’s outfit is right for Antarctica. I’m going to bring up the idea of a hat and goggles (similar to the two on the right) that Dyer can wear outdoors, and figure out a solution for gloves this week. The benefit is that we can probably get away with not changing the Interior Tower scenes, since they take place indoors. We’d just need to have Danforth drop a bag before he inspects the hieroglyphics on the wall. We can fix any minor continuity changes when we polish the animation and re-render, but I really think it’s important that our character designs fit the environment. 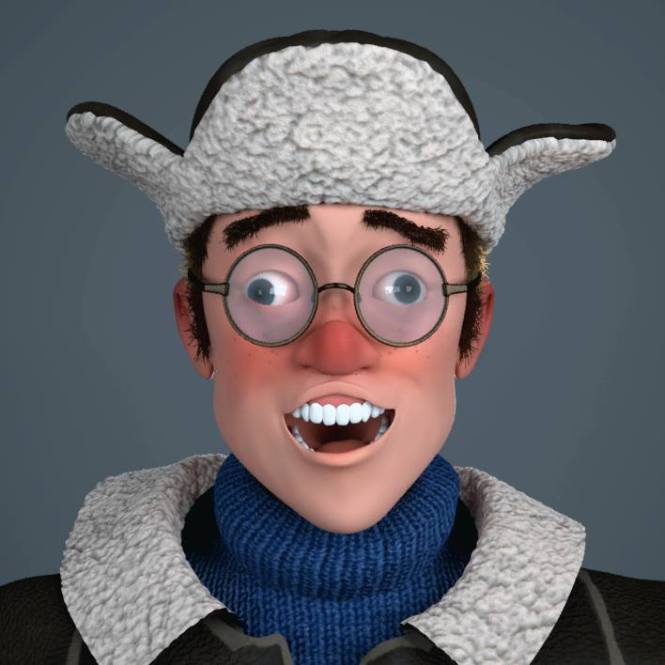 (The last two images were rendered before the clothing was finished, hence the grayness and lack of collar thickness.)

Josh took care of Isaias’s hieroglyphics, tracing them out with the Cintiq. They will be implemented into the scene before we render.

During our meeting this week, I’d like to have a final character review so we can address any final concerns before I move on from these guys and begin working on something else. The most important thing I want to tackle is the weather-proofing of our Character designs, and see how the team feels about a hat for Dyer and some gloves for the two of them. Once that’s done, I’ll be excited to work on something new– the Shoggoth.