I still put our script as priority #1.  We are meeting as a group tomorrow to finalize our script so we should finally be able to move forward. Anyways, I started the week by writing a new version of our script after meeting with the group and discussing all the changes we wanted to make.  That has led us to our meeting tomorrow to hopefully finalize our script.  Other than that I continued to work on modeling the Elder Thing.

Summary:  I spent a few hours going through the old script and restructuring our scenes.  We spent a lot of time talking about the problems with our script as a group so I took all our decisions and typed up the new draft.  I then spent time talking with Ethan, Val, and Dave about the state of the new script and where we want it to be as we create the final draft.

Pros: I’ve never been happier with the state of our script, I’m finally really proud of it.

Cons: We had a couple disconnects on some things and we need to finalize this now.

Summary:  I just kept working on the model of the Elder Thing.  I’ve gotten the mesh just about finished and I’ve started to use joints to pose the creature.  I plan to have this model done by next week at the latest.

Con: It’s taking more time to finish because of all the script stuff we’ve been doing. 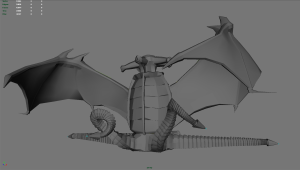 1. Finalize the script, knock out the storyboards with Dave, and get cracking on the animatic.

3.Start animating if the above get finished and if the character base rigs are done.