As others in my team have already posted, the major milestone of this week was settling on a story that we were all completely happy with. In addition to the “mother of all script meetings,” I worked on Project management-y things, shading and textures for our characters, and storyboard thumbnails. 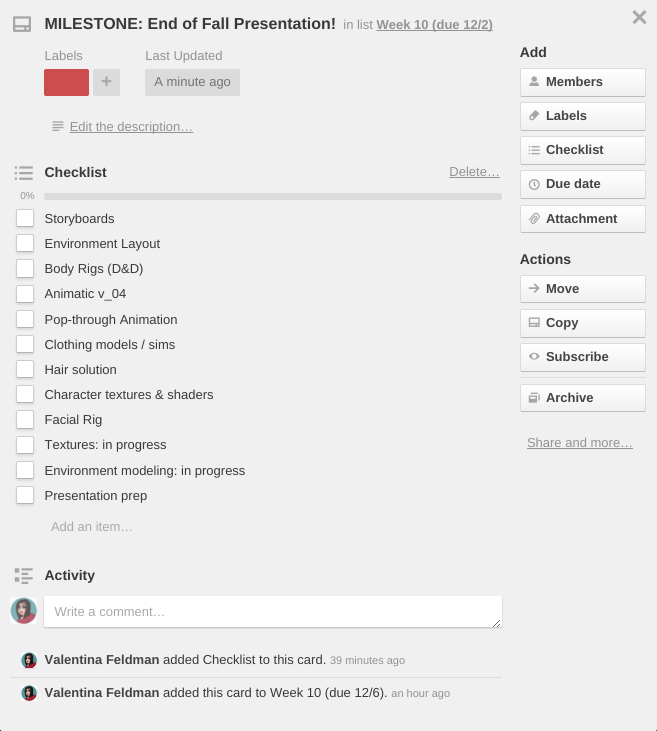 Summary: At our last meeting, Nick expressed an interest in some sort of updated milestone tracking system through the end of this term.This coupled with my observation that our Kanban cards weren’t being significantly utilized prompted me to update our Trello board. I have created cards for every milestone we want to finish by the end of this term, and lists for every week / deadline remaining until our end of Fall presentation. The free space around weeks 8 and 9 will serve as a buffer for everybody to complete their tasks. I also created a task list with our total milestones for this term.

In addition to Trello stuff, I also worked on researching asset management techniques. This will be a major topic to cover at this Wednesday’s weekly, since Animation will be beginning this week and layout is dependant on a solid file hierarchy. On one hand, having a large project will guarantee that every scene is referencing the same files, without needing to duplicate updates into separate sub-projects or break the local references by linking outside a project. I want to minimize the chances of human error, and this seems like the best way to ensure that everything is always consistent.

On the other hand, having smaller sub-projects would allow for a much easier time rendering locally, without needing to drag an enormous project folder to the desktop every time we want to use a machine. I’m worried that storing everything in one place will cause problems due to the sheer volume of data sitting in one project folder. Does the render farm try to load the entire project folder, or only the files referenced within a scene?

Task #3: The Mother of All Script Meetings & Storyboard Thumbnailing

Summary: As others have already noted, this week we had a 3.5-hour meeting during which we went through our script line-by-line and came to a final agreement. Although we are still awaiting feedback from our screenwriting contact, I’d like to stress that FINAL agreement more or less means final at this point. We took all of his advice and revisited the areas that he had problems with, so unless he has some glaring issues with this new version we will be pushing forward with animation.

I also met with Gabe and Dave this week and helped a bit with storyboard thumbnailing. Or, well, I helped with acting out the shots and suggesting a few cinematography things. They actually did the thumbnailing part.

Summary: Continued working on Dyer and Danforth’s textures this week. They aren’t completely finished at this point, but because the deadlines for our weekly deliverables are on Wednesday I’m not going to lose too much sleep over it.