More progress! I was hampered last week by a lack of files to work with, this week I haven’t had that problem. Most of my time was spent working on the animatic and building the template for the three panel display. Additionally I met with our Illustrator and moved forward with the motion graphics sequence as well.

What I did: I updated the timeline with new footage and worked on cutting together an edit of our animation out of purely reference footage. Established pipeline for quickly iterating animatics moving forward.

Pros: The new footage is looking great and having some splined playblasts really helps with timing.

Cons: Now that I have moving animation we need to lock down the audio ASAP. I’m meeting with the animators tomorrow to solidify which lines run into which shots. 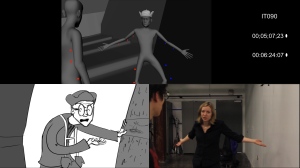 What I did: I met with our illustrator to solidify our plans for moving forward as well as worked on creating assets. Additionally he’s going to be helping with conceptualizing few visuals such as final mountain monster and Lake’s notebook

Pros:  Ink is on the paper and assets are in production

cons: Wasn’t able to connect until later in the week

What I did: Joined in on group discussion about changes to Lake’s camp and tent

Pros: We have a seriously solid solution that saves on animation

Cons: From a purely cinematic standpoint some of the shot re-arrangements are slightly weaker but the benefits in saved animation vastly outweighs the negative.